While my family is from the Fiji Islands and has been there for generations, we are of South Asian decent. This means that there are still cultures and norms that I can relate to on a certain level. One of those to an extend is the pressure placed on South Asian American daughters to behave a certain way.

Piyali Bhattacharya’s compilation has a theme of the burden of expectations placed on daughters with stories from South Asian American women on their experiences growing up. What I appreciate is that each story reflects the multiple facets of daughterhood. As the book’s description says, “Her gratitude for her immigrant parents’ sacrifices creates intense pressure to perform and embody the role of the “perfect daughter.” Yet, the demand for such perfection can stifle desire, curb curiosity, and make it fraught for a Good Girl to construct her own identity in the face of stern parental opinion.”

The stories are simultaneously heart-warming and heart-breaking. I immediately handed it off to my cousin to read, as this is one of those books that I think every South Asian American can appreciate, and really, immigrant woman of color in general. I hope to see more immigrant woman of color not just telling their stories but those stories being published and shared widely. 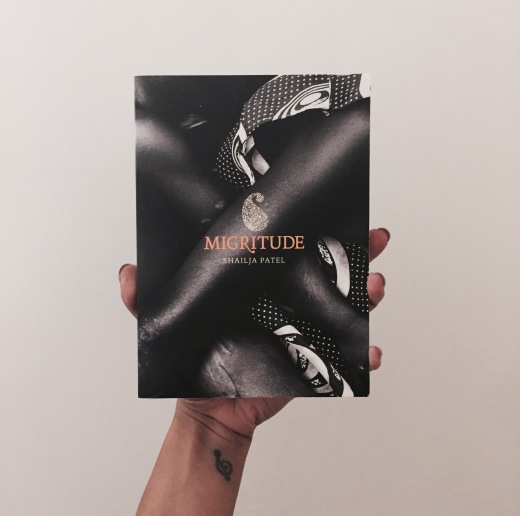 While I make a point to read women of color as much as possible, that is also what I naturally gravitate towards. In their stories, I find my own. This is the case with Shailja Patel’s Migritude. It’s a poetic memoir with political history weaved in. Patel tells a story that I can relate to as an immigrant woman of color. She paints a portrait of family history and women’s lives in particular, imperial violence and the migrant journeys they take. Patel herself was born in Kenya and lived in both England and the United States. She is also a performance artist and the book sometimes reads as a performance because of this.

It’s a deeply satisfying read and while it’s extremely personal, it was also relatable because Patel address the wider political issues of empire, injustice, colonialism and what it means to be an immigrant. I can’t recommend enough.

Between the World and Me has sat on my bookshelf for months. Was it the tremendous accolades that prevented me from picking it up? I have a tendency to put books that are in the spotlight on the back burner for fear they might not live up to my expectation of them. That is not the case with Between the World and Me.

Ta-Nehisi Coates is one of my favorite writers. The way he weaves narratives is so eloquent and detailed. The book is a series of essays, written as a letter to his teenage son confronting the notion of race in America and how it has shaped American history. I can’t begin to imagine the pain many black people face when raising their children in this world. Coates’s stories of his friend shot and killed by the police, and his discussion of education add so much depth to the conversation.

I couldn’t even begin to write a “review” of this book, but I can examine how much I love Coates’s writing style. It is full of profound quotes and passages that stayed with me weeks later. There aren’t easy solutions offered up in this book, instead, it is full of unyielding truths that every American should read.

“We were black, beyond the visible spectrum, beyond civilization. Our history was inferior because we were inferior, which is to say our bodies were inferior. And our inferior bodies could not possibly be accorded the same respect as those that built the West.”

I’ve read and re-read eight of Dr. Angela Y. Davis’ nine books in the past few years, but I intentionally saved her autobiography, letting it sit on my shelf until now. Dr. Davis has had a profound influence on my life and thoughts on social justice, racism, feminism, and criminal justice. I’ve watched documentaries, her speeches, and read countless articles on her work, but I wanted to savor her writing on her life experiences.

Dr. Davis’ autobiography didn’t any new information for me per say, but it was the way in which she wrote that captured me. I had never read an in-depth account of her time in prison as was offered in this book. It also details her life growing up, her family, time in college and just how she became involved in social justice. It’s not just an autobiography, but a call to arms to fight the racism that is still so deeply embedded in our country. It’s hard not to see the parallels of the time that she writes about and today’s fight for justice and the Black Lives Matter movement.

I admire Dr. Davis and her story, her fight against racism and the unjust, and her perseverance. It only motivates me further to continue to the fight. I am so grateful for her sharing this story and her work.

Some books live in my mind. Academic books that speak to my reasoning. Some find their way into my heart, tugging at its chords without reason. Then there are the books that survive in my soul, carving a corner for themselves whether I want them to or not. Sleeping on Jupiter by Anuradha Roy has found its way there or perhaps it’s taken a piece of it away.

The story of Nomi, Latika, Vidya, Gouri, Badal, and Suraj is one of the hardest I’ve read. Specifically Nomi. The prose is beautiful but Nomi’s story struck a personal chord so deep within that I found myself reacting physically at times. Feeling panicked, nauseous and as if the world was caving around me at a point in the story. It was devastating in a way I didn’t think was possible.

This book ruined me in a way that I can’t even begin to write about the story. I don’t when I’ll recover. What I know is that it will live with me in a deep corner for quite some time.

I’ve always enjoyed reading anthologies of essays, especially on topics that are difficult to digest. Who Do You Serve, Who Do You Protect? is a collection of essays published by Truthout by various writers, journalists, and activists that tackle not only police brutality, but freedom, black liberation, and the fight for justice.

So often the struggle for justice and black liberation is focused on cishet black men, yet Who Do You Serve, Who Do You Protect? shines a light on the communities that should be included in the fight – black women and LGBTQ people. The various issues are analyzed and tangible; concrete community solutions are given.

This is a tremendously important read not just for those interested in liberation and abolition, but society as a whole.

Although Grace Chang’s Disposable Domestics: Immigrant Women Workers in the Global Economy was published in 2000, it is still so relevant to today’s society 16 years later, especially with the rage on debates over “immigration reform.” As Robin D. G. Kelley, Distinguished Professor of History and Gary B. Nash Endowed Chair in United States History, UCLA, states in her review:

“Chang exposes the outlandish myth that corporate interests, big agriculture, and liberal Democrats represent enlightened voices standing against mass deportation and xenophobia. Instead she reveals a long history of collusion between the U.S. government, the IMF and World Bank, corporations, and private employers to create and maintain a super-exploited, low-wage, female labor force of caregivers and cleaners. Structural adjustment policies force them to leave home; labor, welfare, and educational policies deny them basic benefits and protections; employers deny them a living wage.”

Chang links immigration policy and “welfare reform” in ways that are not often done – noting how eliminating access to health care, immigration and welfare is directed against female immigrant workers in the U.S. Chang lays bare the political systems that push immigrant women into a certain labor class, which drives the global capitalist structure. She does so without “preaching” as the book heavily centers actual interviews with immigrant women and other women of color.

This book is so informative but it was also deeply personal for me. I couldn’t help but think of my aunt new to the U.S. from Fiji, who left her children to care for others. Or my other aunt who worked as a maid in hotels while her children were left at home. Their struggles to stay afloat while fighting racism and misogyny. It should be required reading for every feminist studies class, politicians, and those in public policy.

Communications for Social Good
Create a free website or blog at WordPress.com.