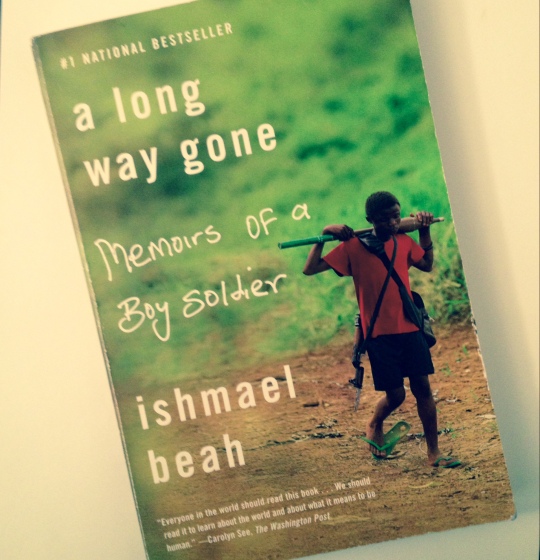 It had been quite a while since I cried while reading a book, yet, it has now happened twice within a few weeks. A Long Way Gone: Memoirs of a Boy Soldier is a world famous memoir published in 2007 and written by Ishmael Beah – a child soldier from Sierra Leone.

Africa is a beautiful, massive, complicated continent and while I have read many books and articles on the subject, I had never really delved into Sierra Leone, apart from what I had seen and heard about the brutal civil war. A quick search of the subject and this book is one of the first that pops up.

Ishmael Beah’s story is horrific, heart-breaking and incredible. Ishamael tells his story in a very straight-forward manner. He writes all of the horrors of becoming orphaned, being on the run, becoming a child soldier, fighting against the rebels while being hopped up on marijuana, speed, cocaine and gunpowder in order to commit horrible murders. It’s a terrifying look at how Ishmael was brainwashed and slowly began losing his humanity.

Beah doesn’t hold anything back, as this story is raw and brutally honest. This book is a look into one child soldier’s story, which fortunately, ended well as Ishmael is now an author, UN speaker and activist. However, not every case is like his as this is a worldwide issue. At the time the novel was released there were more than fifty violent conflicts worldwide, with an estimated 300,000 child soldiers.

Many classrooms have adopted this as mandatory reading, and while it is not easy subject matter, it is an important and must read.